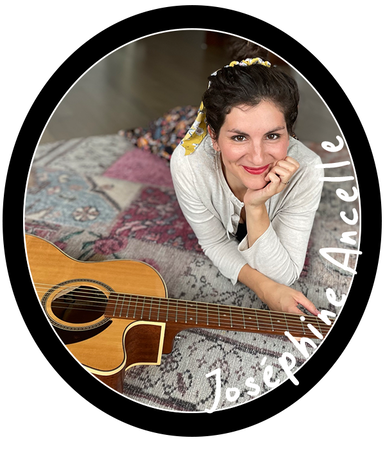 Joséphine Ancelle grew up in Paris in a family of actors and musicians. She took her passion for singing to New York at the age of 18, where she developed her career by regularly performing at many of New York’s renowned venues, such as The Bitter End or The Living Room. Between 2007 and 2011, Joséphine released one full length album, two EPs, and two singles of her Franco-American compositions, with her song Les “Je t’aime” receiving radio airplay in France and Germany.

In addition to pursuing her career in music, Joséphine completed her master’s degree in Speech Language Pathology from Teachers College, Columbia University in 2016, having found a new passion for this field that combines science, compassion, and creativity.

In 2013, Joséphine joined the team of visiting artists at La Petite École, a French immersion preschool in New York City. Joséphine began writing songs which focused on accompanying the children in their daily routine. Over the years, she composed 12 songs for the school, in French and in English: songs to say “hello” and “goodbye”, to “clean up” or “wash hands”... Released in 2021 on all streaming platforms, the album, Les Chansons de La Petite École, was produced by her long-time friend and renowned producer, Paul Umbach.  Les Chansons de La Petite École were also released on Bayard Jeunesse’s educational app, Bayam, in September 2021.

Joséphine loves knowing that her songs are sung by young children every day while helping them learn about the world around them!

Les Chansons de La Petite Ecole is a bilingual French and English album of songs to accompany children in their daily school routine.